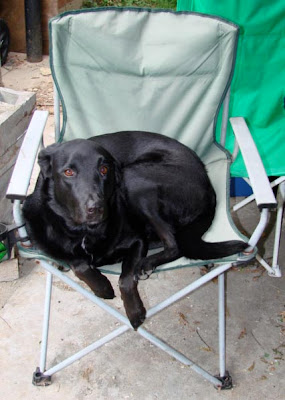 Wendy dog turned 3 this past January and has been a wonderful companion. She is dainty and, if she were human, would probably be quite prissy. She won't go out in the rain and gives you a "you've got to be kidding me" look when it's even suggested. She thinks she weighs 10 pounds and loves to climb in to your lap and snuggle. 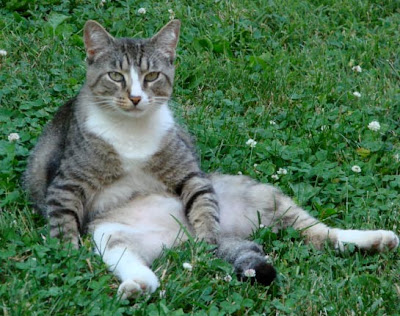 We have stray cats all over our neighborhood. We adopted Tigerlily after seeing her and Wendy together. Our cat, Cleo, had just died and Wendy had gone in to a serious depression. Tigerlily showed up and their relationship was unlike any we had ever seen. The first time they met, Tigerlily rolled on to her back and Wendy started licking her tummy. She isn't allowed in the house very often, but she sleeps in our basement during bad weather and has been known to make herself at home in our car when we forget to close the windows.
Posted by AnnaMarie at 9:34 AM

Our cat sits up just like that!! We think it's so funny the way he does that.