As I type this post, The Simpsons play in the background. It is 8:45am. It MUST be a Riley weekend. Riley, my 9-year old step-son, spends every other weekend with us. It's not enough, but with all of his activities and friends in his home town (an hour away) it's what we can do. It's hard to balance letting him enjoy his weekends as a kid, with his friends, and our desire to have him all to our own.

Riley is really an amazing kid. Sophie is so very lucky to have a kind big brother. I have no doubt that he will be a great asset to her as she gets older, and he's smart enough not to buy her beer when he is 21 and she's only 13. He is SO smart; amazing at math and he reads at a 6th grade level (he's in 4th). He loves video games and dungeons and dragons, pizza, cheeseburgers, and bacon. His hair is thick and unweildly and it's nearly impossible to get a picture of him without him sticking his tongue out or rolling his eyes. One rare example is this one, taken on Thanksgiving: 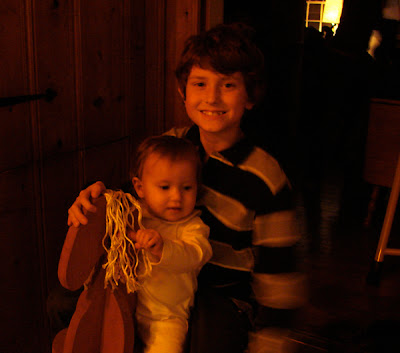 It's a little dark, but it's a smile. He put Sophie on the horse and crawled on behind her. She had such a good time.

I first met Riley when he was almost 2 and I fall into a rare, fortunate group of step-mom's; he's never known his dad without me as his partner. He was 4 when we started keeping him, and then it was only 1 night a month. As our time with him has increased (a week during the summer, 4-5 days when he's on break from school) we have marvelled at how he has grown - this past years especially.

The other night he was hungry and asked for some cereal. I told him we had some honey nut cheerios in the basement pantry and he could get them. He went downstairs and Roy and I discussed whether or not he'd be able to reach the box, waaaay in the back. I said no. Roy said yes. Riley came running up the stairs, box in hand, got down a bowl, poured the milk, and set up a TV tray in the living room where we were watching a movie. Roy gave me an "I told you so" look and I smiled. So old. Later that night, as I was making myself a cup of tea, I found the box of cereal he opened. 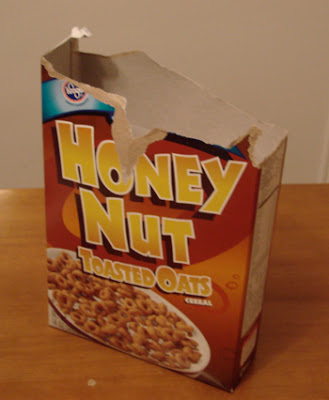 Maybe thats how they are supposed to be opened and he is just light years ahead of the rest of us....

Kind of looks like a bear got into the box...

oh, it's fun to read about another 9 year old...what an amazing life experience...for all of you.

glad you blogged about riley -- good to get to know him a bit.

That's my Riley! My favorite step-grandson!!! Sophie IS lucky to have him!!!!!