I'm not going to lie. Being 20 years old, moving in with my future husband, and accepting the motherly responsibility of a 2 year old (even part-time) was not exactly what I was looking to add to my carefree and uninhibited life. Indeed, I knew about Riley from the time he was born so nothing about his presence in Roy's life was a surprise, and yet I struggled to accept exactly what this meant for me.

One day, while we were driving to see this already kind and empathetic boy, Roy said something that forever changed my life.

Riley didn't choose to be here.

Oh.my. Was my attitude not the very definition of selfishness?

10 years later, my life has been blessed and rewarded by the presence of an amazing 12 year old boy.

I've been thinking about this post for a long time. How to sum up Riley and how to sum up my experience as a step-mom.

Riley turned 12 in March and, sadly, our picture drought has affected him most of all. I was glad to get these two pictures from his birthday party - his family birthday party (not the Dungeons and Dragons party with a tray of chic-fil-a nuggets that we hosted in our basement lair.)

The first, pure joy upon opening the cell phone that Roy and I got him. (those with other 12 year olds know how hard that "real" smile is to capture.) 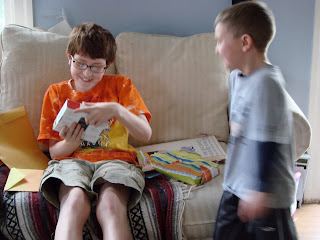 and this, which shows his patience and love of his little sister and cousins - who completely revere him. 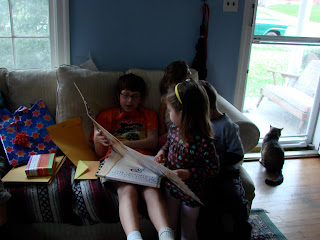 Riley is an amazing big brother, not only to Sophie but also to his other brother and sister who are 2 and 4. He is terribly excited to add another rugrat to the mix. His empathy is astounding. He balances a life between Dungeons and Dragons and football that I find remarkable. Last year, when he played "King Louie" in his school production of "The Jungle Book", he said, "being in the play isn't popular, but I really like it so I don't care." I hope he never loses this self assurance.

He's smelly like a 12 year old, dawdles uncontrollably, and is starting to voice his keen interest in the opposite sex - something that Roy seems a little bit conflicted over. He's very into magic tricks and loves to put on shows for us after dinner. And he loves - I mean loves - bacon.

When the Wii first came out we asked him if he would rather have a Wii or a table full of bacon for Christmas. His reply, "How big is the table?" We got him the Wii, but sometimes he wonders out loud if he made the right decision.

As a step-mom, I'm at a great advantage because Riley has no memory of Roy without me; I've always been here.

Being a stepmom is not like being a mom to Sophie and it's important to me not to show preference or a difference of treatment. That's not always easy - not because I love Sophie more than Riley - but because our relationships are so different.

Riley has a mom - a mom he loves as any son should! I am not a replacement for that. He's always called me "Anna" and I've never encouraged any other name. Still, I am a guiding force in his life.

I walk a fine line between pushing too hard and letting him float. Food is an uphill battle, so how hard do I push? We have him rarely and we want to make his visits at our house pleasant, so it feels unfair to make him work too hard during his time there - yet taking out the recycling is good for him.

It's no secret that Roy and I live a very different life than his mom and step-dad; from our politics to our lifestyle, we couldn't be more opposite. Roy makes him defend his arguments with the force that only a Student Congress and Debate Team participant could encourage, and I quiz him on fruit and vegetable identification, control his participation in violent games and movies, and we are both proud of his musical tastes.

We don't see Riley as much as any of us would like - only every other weekend - but as he's gotten older he asks to come more often. We've encouraged this and made it very clear that he can stay with us as much as he likes. I think the current draw to our home is that we're watching Lost (on Season 3 at the time of this post) and he's more than a little bit obsessed. I like to think that we're the reason he wants to come every weekend and not his budding crush on Kate Austin.

He was born a Pisces, the sign of which is two fish swimming in opposite directions. We already see this in his life and I think it will be a persistent force. My greatest hope for him is that this polarity will take him on a path of kindness and diplomacy. He once told us, "I have 2 moms, 2 dads, 4 grandpa's, 5 grandma's... I am the luckiest kid in the world." As a parent, step or otherwise, isn't that the most we can ever hope for our children to feel? 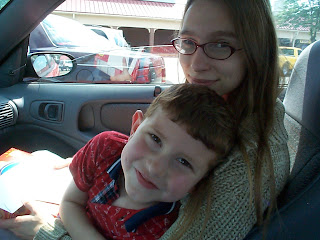 Posted by AnnaMarie at 9:01 AM

oh, this is beautiful.

and just what i wanted to read this weekend morning.

your grace and love spills all over those words.

how big's the table? *LOVE* it! you guys really are lucky, riley is SUCH a good kid!

such a beautiful post AnnaMarie. You are such a wonderful mother and step mother. Those kids are so very lucky. :)