At this year's Bluegrass Festival, someone suggested that the Cornett family get together when we're not putting on a party for 20,000 of our closest friends, or celebrating in the chaos of a major holiday. Roy's aunt Linda took this to heart and since June, we have had 2 - count them TWO - unrelated-to-anything Cornett gatherings.

I wish I had pictures of the first. In August, there was a "fight to the death wiffleball game". An incredible amount of Family was able to make it, to the point where each team had 12 players and there was a large handful who sat out.

This party was much smaller, and indoors. The activities included setting up battles on cousin Paul's Lord of the Rings Risk Board. 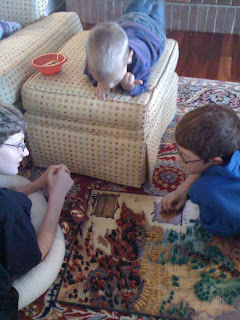 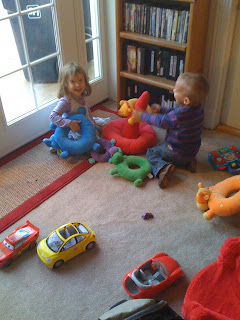 And watching the UK Football Game. 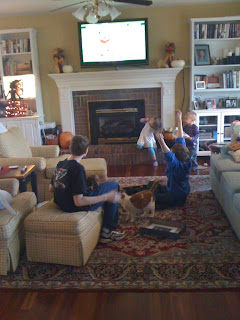 We adults were also there, but nearly as cute to photograph. We played Cranium. Ran downstairs to Mallory's apartment every time Sophie and Aiden got a little too quiet. And we talked and laughed and talked and laughed.

And aunt Barb told me that the pear tree in their yard that borders Grandma and Granddad's house is overflowing with pears. Today we went to fill our basket. 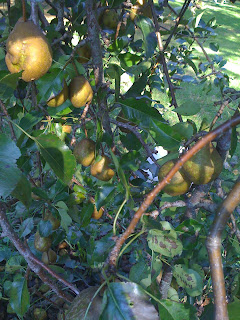 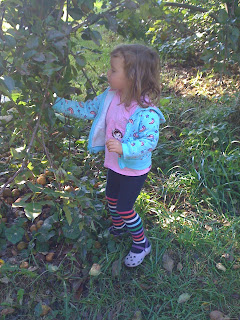 (we had to take off her wet skirt.) 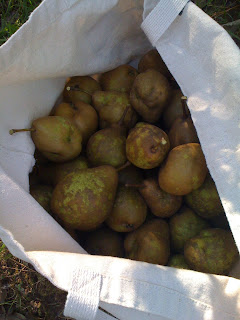 So I'm going to make pear sauce. Have sandwiches and salads with pear. And make this cake which I think looks fantastic. Oh what a lovely surprise - a family pear tree!
Posted by AnnaMarie at 5:00 PM

what do you use pear sauce on? i've always liked the flavor of pears, but not so much the grainy texture

GOSH! A family pear tree? How lucky is THAT?! Pears have become my new favorite food ever since my first trimester with Lydia. I learned from Bobbie to put them in salads. I like them on sandwiches, too. (Can you tell I've done a lot of thinking about pears in the last year? :) )

Without further ado, I'm going to look at that pear cake recipe and make this weekend. :)