Last weekend, the Cornett family gathered at Old Friends Farm for a surprise birthday party for Roy's granddad, Bob. I wondered how in the world I could take so many pictures and not get one of the man of honor? Pretty simple, really. At 80, Bob continues to be the most passionate, the most energetic, and the most full of life person I have ever met. And he rarely stays in the same place long enough to capture the moment.

Still, there were plenty of moments.

Sophie and Aubrey playing in the leaves 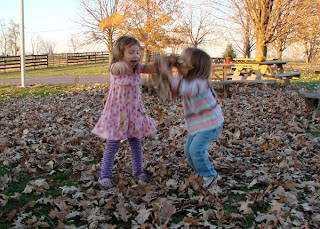 and then having a very important conversation with their Pa. There was something about watching this exchange that made me think that this man is going to have to keep his wits about him over the next 10-20 years. These girls could take him for all he's worth. 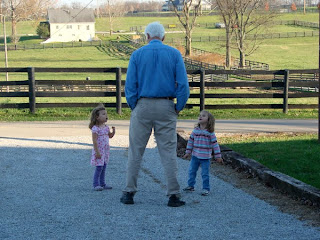 I don't know how it happens, but anytime we go anywhere, there is a golf cart. And there are rides. And the kids learn how to turn them on at a very early age. Fortunately, the adults have learned to remove the keys when not in use. 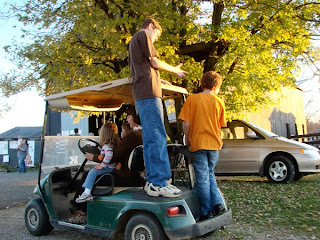 There was the feeding of horses. 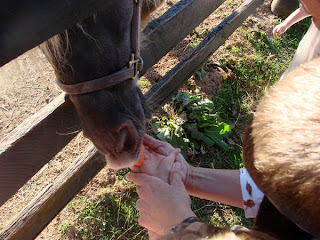 And throwing of rocks. (yes, I should've stopped them immediately... and I did shortly after I took this picture, but they were so darn cute.) 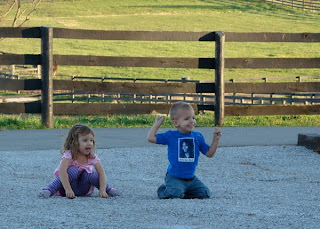 And we got some great group shots. Here are all of the Great-grandkids. It was current until two days later when Barrett Cornett Bertram was born. 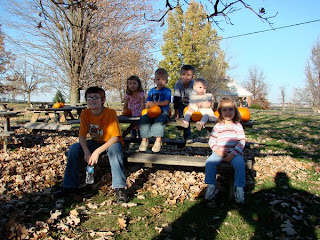 And we got a nearly-complete family photo. It's so rare and such a treat. Despite missing three members of the family, this one is a keeper. 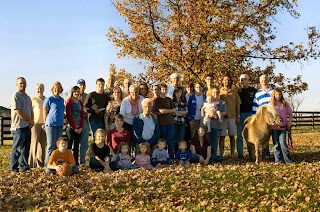 Posted by AnnaMarie at 8:17 AM