There's no denying that these past few days have been rough. I have been hormonal and exhausted and have felt buried under the amount of housework that I not only have to do now, but with panicked thoughts of how in the world I will do it when I go back to work on September 1. I know that it's much too early to be thinking about then, which my brilliant and beautiful best friend reminded me will be so much different than now, but still... the thought of it makes me want to lay down with a cold cloth on my forehead and take a nap.

Like most of the country, we have been hot in Lexington. Hot and humid and sticky and ugly and I haven't been able to get out like I want to, especially with Miller. As awful as it was being so pregnant with Sophie through the month of August, walks with her through the crisp autumn air was a delight.

Today, it was in the upper 70's/low 80's with very little humidity. It was pure bliss and we all took full advantage.

I find great release in pulling weeds (oh, poke weed! The bane of my existence!) and was able to weed my entire flower bed without suffering the aches and pains of pregnancy. Take THAT sciatic nerve! Getting into it was so cathartic after these days of feeling so funky.

While I weeded, Roy installed new gutters on the back of the house - just one of the many house renovation projects going on at the moment - and Miller held a blanket down like he'd been doing it his whole life. 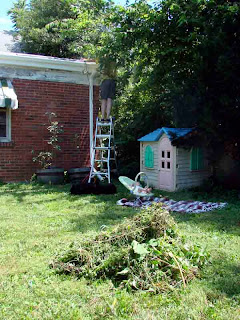 That there is the pile of weeds I raked up, not including the tree-like pokeberry that already had been put in the Lenny.

And here's my little man, over 1 month old. We're still eagerly awaiting his first smile. He has such a serious look about him, like he's already trying to figure out some mathematical equation that I will never understand. 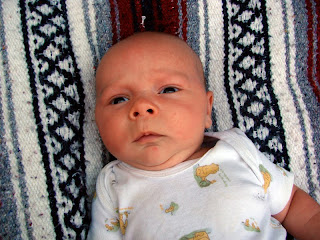 Wendy had a job today too, her favorite job, standing guard over the child(ren). 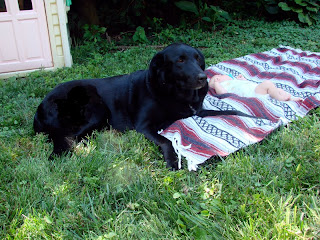 As a happy aside, I have been asking for a clothesline for quite some time, but I'm not sure Roy ever believed just how badly I wanted one. Our yard is sooo small and we needed one that we could easily put up and take down. 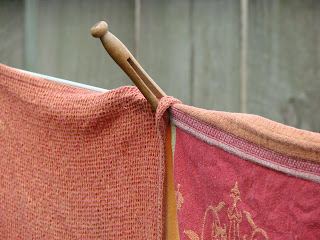 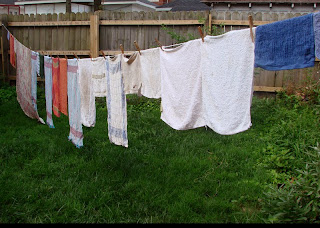 It really is the little things.