I will make no bones about it - I don't like football. It's boring and I don't understand it and all the crashing into each other and head trauma and... well, it's just not my thing.

Riley, however, LOVES football and is really good! He played last year and lo and behold, this year the kid is starting quarterback!

Despite my feelings about the sport, I am so proud of him. He had his first game last weekend and while they lost in the final seconds, he played great, had some good passes and was IN THERE on every play. He's #5 (or "numero cinco" if you ask him) 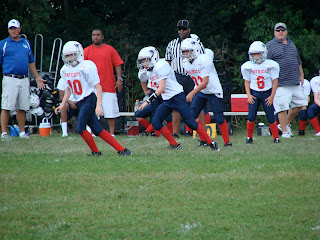 Riley is now in 7th grade and, while he can generally be found on his iPod Touch (which he saved all his Christmas and birthday money to buy), he still has time to be an amazing big brother to Sophie and is truly enjoyable to be around. He came home from school on Friday with Watership Down, saying that he saw the book on Roy's bedside table and thought it might be good. What 12 year old boy reads a book about rabbits just because his dad does?

I continue to marvel how he walks the line between Dungeons and Dragons and starting quarterback. This kid is so cool. 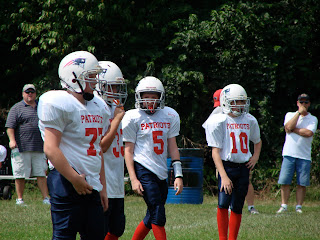 His football games are also a good opportunity for us to spend time with his other family. When Sophie saw Riley's sister, Kamryn, she said to her, "My brother and your brother, Riley, he has two houses" and off they went to play. 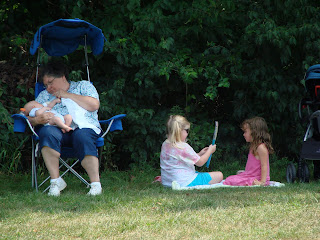 this is one thing that is wonderful about you, as a person and as a parent: you can take something you hate and get behind it and be proud of it and become a fan, all because a person you love is invested in it.

Have I ever told you what an amazing example for a mother and step motheryou are? Well I am now! You are inspiring!